As Long As I Can Cycle, I will Cycle for my Sisters and Brothers through various foundations!

Although I’m no longer in that Navy uniform, I still want to express my support for my fellow brothers and sisters. I feel that once you have served in uniform, you are a family that no one will understand unless you are in it.  You take that oath for life. I would do it all over again if I had to, with no hesitation, just like many of my fellow sisters and brothers.

I grew up in New Lenox, IL, went to Providence HS, and after school, I joined the U.S. Navy and served for four years than a Navy spouse for 15 years.  After boot camp in Orlando, FL, my first duty station was Yokosuka, Japan aboard the USS Kittanning.  I also served at Coronado, CA. I come from a very long line of military members. To mention a few, a 4th great-grandfather in the Revolutionary War, a 2nd great-grandfather in the Civil War in the Battle of Shiloh, an uncle in WWII at Iwo Jima, my Uncle Adam Tymowicz was shot down over Ruille France during WWII only to be MIA on Nov 7th 1950 in the Korean War in Naha Japan, and my father Thomas being in the Navy stationed on the USS Courtney and me following in his footsteps.

Cross Country Cycle 4 Vets started as a single cycling journey that took me 3042 miles as a self-supported solo cyclist over this great country, from San Diego, CA to St Augustine, FL for the Gary Sinise Foundation in which I was able to raise $30,685 over my goal of $25,000. I returned home in which I started feeling lost; I thought I had lost the meaning in my life. For two years of fundraising to make my goal and cycling 61 days I had a purpose which was “waking up, cycling east, eating, talking about our veterans in need, shower, map out my next stop, sleeping and repeating” my mission was to raise money for our veterans and 1st responders, now as I sit here home looking for a job as ordinary people have to do for I have many bills to pay. I felt that I had lost the most important meaning in my life which I had found as I rode across the Southern Tier, as my ride was over, and so was a big part of the purpose in my life which I felt so deeply about... I thought that I had to find that meaning again, that meaning of helping my brothers and sisters…I found an excellent Foundation called: Oscar Mike Foundation, in which I then called Noah, discussed what he was doing within his foundation, and told myself this was going to be my next big bike ride.

This next ride will take us through 10 states, two countries and 2547 miles across our country and will again be a self-funded tour. We will be leaving from Lake Forest, IL, heading north through WI into the Upper Peninsula, through MI and then east through Canada, then into New York via the Niagara Falls down to New York City to the Freedom Tower Memorial on 9/11/2021 for the 20th Anniversary of 9/11 then through NJ and heading west through the rolling hills of Pennsylvania though OH, IN and finally finishing in downtown Chicago. This day holds many memories for me, and our military members and many Americans. I have to get everyone involved in getting our men and women “On the Move” again through donations to Oscar Mike Foundation.

We wanted to find any way to help my brothers and sisters with the challenges that some undoubtedly face today.  This is our way of shining a light and letting them know that they are appreciated for all they do for us… for their sacrifices and unwavering commitment to our great nation!

We would like to thank all our sponsors, endorsements, and everyone that has donated to Cross Country Cycle 4 Vets in support of the Oscar Mike Foundation.

Let’s get those donations coming so we can make our goal of $25,000 for this wonderful foundation that keeps our Injured/Wounded men and women” On the Move."
through adaptive sports.​ 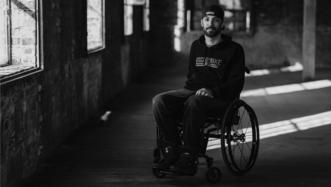